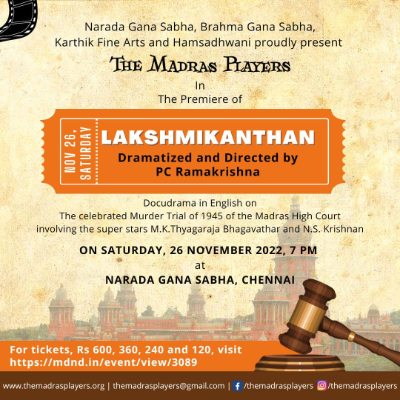 Under the auspices of Narada Gana Sabha, Brahma Gana Sabha, Kartik Fine Arts & Hamsadhwani and produced by  "The Madras Players"

LAKSHMIKANTHAN, a docu-drama IN ENGLISH on arguably the most famous murder Trial of the last century in the Madras High Court----the Lakshmikannthan murder case of 1945, in which two major Tamil film celebrities, the Super stars of that era, M.K.Thyagaraja Bhagavathar, and the 'Chaplin" of those times, N.S. Krishnan, were among the accused.
It was a jury trial ( in fact, the last jury trial of the Madras High Court), presided over by an English judge. The renowned P.V.Rajamannar was the Advocate General leading the Prosecution, while the highly regarded K.M.Munshi ( the Founder of Bharatiya Vidya Bhavan), was the Defence Counsel.
Lakshmikanthan was a sleaze journalist, who, through his magazines, "Cinema Thoodhu", and, later, " Indu Nesan", wrote sordid stories on the secret amorous activities of film stars and other prominent personalities of the time. He even resorted to blackmailing several of them. Thyagaraja Bhagavathar and N.S.Krishnan were among his victims.
Unable to tolerate Lakshmikanthan's scheming and devious methods, it was alleged that a conspiracy was hatched to murder him, and  that Thyagaraja Bhagavathar and N.S.Krishnan were part of it.
Lakshmikanthan was then attacked in broad daylight by two persons and stabbed. He died the next morning in the General Hospital.
M.K.Thyagaraja Bhagavathar and N.S.Krishnan were arrested, along with 6 others in this connection, and brought to Trial in this celebrated case of the Madras High Court.
This docu-drama, based faithfully on the actual Trial transcripts of the case, presents the case in dramatic form.
It is somewhat strange that, for a case so famous, involving such well known personalities, there have been very few, if any, attempts over the years to dramatise it either on film or on stage. The Madras Players are proud that they perhaps are the first to do so 80 years after it happened.
So....What did the Court decide?  What did happen to the superstars ?....  Watch the play and relive a colourful part of Madras' history.