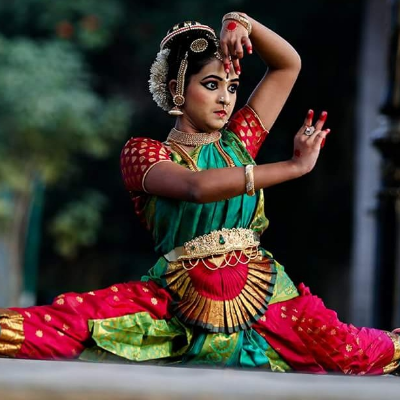 Srujana Suresh is learning Bharatanatyam since 15years under the guidance of her Guru Smt. Bala Vishwanath. She has completed her junior, senior, vidwath poorva in distinction conducted by Govt.of Karnataka Secondary Board Exams. Presently she is preparing for Vidwath Anthima. She has given numerous performances in many prestigious sabhas. She has participated in National level Bharatanatyam dance competition conducted by South Indian Cultural Association, Hyderabad and also in many district, divisional and state level competitions and won prizes. She has received Scholarship from  Karnataka Sangeetha and Nruthya Academy, received  "Bala Prathibhe"award from Women and Child Welfare Department for her outstanding performance, received 2nd prize in State level Bharatanatyam Division" State Yuvajanothsava 2019-20" organised by State Youth Welfare Department and Department of Sports, Shimoga and many more accolades for her splendid performances.