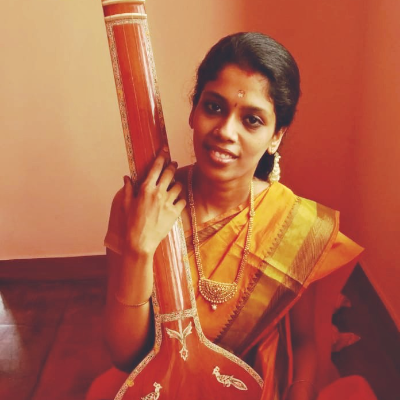 Sivapriya Ramaswami is a rising star of Indian traditional music, who combines years of traditional training in Carnatic Music with a Namasankeerthanam outlook.

Born in a farnily which cherishes Namasankeerthanam and Carnatic Music, she was introduced to the world of music by her grandmother Smt.Lakshmi Mahadevan. She started learning music at the age of 3, and has undergone Carnatic Music training under., Radhakrishnan Potty, Smt. Ananthalekshmy Venkataraman, Dr. Aswathy Vinu and the National Award Winner Shri. Parvatipuram H Padmanabha lyer, Trivandrum. She is currently learning Carnatic Music from Shri T.R. Vasudevan, disciple of the great legend Shri Chernbai Vaicihyanatha Bhagavathar.

She completed her Btech from Lal Bahaciur Shastri Institute of Technology, Trivandrum and is currently working as a Software Engineer at Alcatel-Lucent, Chennai.

She has been an actively involved person in both School level and College level Culturals and has even been awarded the Best Outgoing Student from her College for the year 2015. She has ma, awards/prizes to her credit, from stages like Sree Saciguru Thyagaraja Bhakta Sabha, Sree Chithira Thirunal Smaraka Sangeetha Natya Kala Sahakarana Padana Kendram, Sree Neelakanta Sivan Sangeetha Sabha Trust and also at various State and National level competitions.

She has recorded songs in albums like Sandhyadeepam (A devotional album on Devi Chakkulathamma) and Sanjeevamrutham (A Carnatic album on the compositions on Shri Krishnamurthy). She was also nominated by the Neelakanta Sivan Sangeetha Sabha to be a participant of Times Thyagaraja awards by the Times of India.