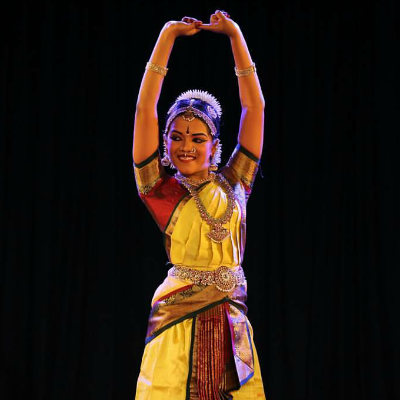 Shruthe Raammohan, disciple and daughter of Sasirekha Raammohan, began her training in Bharatanatyam at the tender age of 4. Her innate talent and passion has made her an asset to Kanagasabai, School of Bharatanatyam founded by her mother in 2002. Currently an under graduate student at Ethiraj college for women, Shruthe has performed in all the major productions by Kanagasabai. She has given solo performances at Tejas B?la Utsav ‘11, Tapas Dance Festival ‘14, Karthik Fine Arts Dance Festival ’15 and Tamilnadu Iyal Isai N?taka Mandram’s Maha Sivarathri Celebrations ’15. Shruthe has also participated in television shows – Jaya TV’s ‘Taka dhimi Tha’, Podhigai’s ‘Konjum Salangai’, Vasanth TV and Peppers TV. She is ‘B’ grade artist of Doordarshan Kendra. Shruthe was invited to be a part of prestigious celebrations by Kalakshetra Foundation ’10, Association of Bharathanatyam Artistes of India (Abhai) Deepaavali Nrithyotsav ’17, Natyarangam (Dance wing of Narada Gana Sabha) ’17 and in 62nd Pongal festival ’18 conducted by Sri Krishna Gana Sabha. Shruthe is a regular participant at dance festivals in temples in Chennai and other parts of Tamil Nadu. Shruthe was a part of the dance drama production - ‘S?kuntalam’ directed by Ambika Buch in and was also a guest performer in the Tamil production ‘Ul?’ choreographed by Anjana Anand in 2015 & 2019-20. Shruthe had the great opportunity of enacting the little Meera in Smt. Chitra Viswewaran’s mega production ‘Meera-The Soul Divine’ which toured the U.K (London) and 17 cities in the U.S in 2016. Shruthe received the ‘Special Talent Award’ by Sri Sumukhi Rajasekhar Memorial Foundation in 2007. She has been awarded the titles ‘Abhinaya Kalaiyarasi’ by ‘Kalaimamani’ Jayalakshmi Arunachalam. She was awarded ‘Bharatha Kal?mani’ by Prayathnam on completing six levels of examinations with a distinction in Bharatanatyam comprising practical and theory assessments. ‘Natya Kalamani’ was conferred on her at her arangetram.