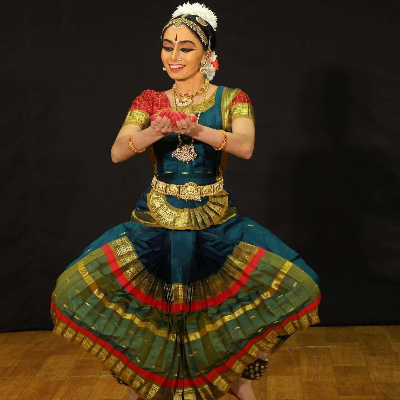 Sharanya Balaji is currently a disciple of Guru Smt. Aishwarya Balasubramanian, Kalaimamani Guru Smt. Anitha Guha, and formerly Guru Smt. Vishal Ramani. Having completed her arangetram at the age of 9, Sharanya has given over 20 solo sabha performances as a part of the Chennai Mazghazi Season at many prestigious venues like Krishna Gana Sabha, Brahma Gana Sabha, and Mylapore Fine Arts. Sharanya has received a number of accolades including being a two-time prize winner at the prestigious Cleveland Thygaraja Aradhana, the title of Yuvashri Kala Bharathi, the title of VDS Arts Academy Top Performer, a prize winner at the Papanasam Sivan Dance Competition, recipient of the Alliance for California Traditional Arts (ACTA) Grant, and Honorable Mention Winner from National YoungArts. Sharanya has not only had the privilege of performing in many productions choreographed by famous gurus such as Smt. Anitha Guha, Smt. Jayanthi Subramaniam, Smt. Radhika Shurajit, Smt. Divyasena, and Smt. Savithri Jaganatha Rao but also served as the head coordinator for the Cleveland Music and Dance Premier League, a team comprised of emerging North American musicians and dancers that stage annual productions at the Cleveland Thygaraja Aradhana. Sharanya is currently a Software Development Engineer at Amazon Web Services.