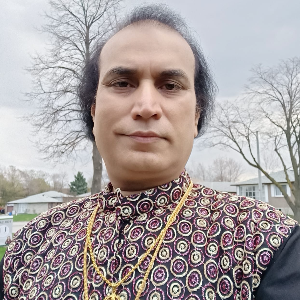 One of the maestros of vocal classical music, Pandit Prosenjit Deoghoria, has the ability to produce the true gravity and ethos of the ragas. Prosenjit has mastered it through years of devotion and paved his way to refinement and inevitable depth in all his performances. Coming from a family of musicians , Prosenjit received his initial training in classical music from his uncle Late Shri Mihir Kumar Deoghoria. Later he was trained in this art following the Guru- Shishya Parampara by Late Shri Ganesh Prashad Mishra and by Dr. Surendra Shankar Avasthi, Principal of Bhatkhande Sangeet Vidyapeeth, Lucknow, India and disciple of Ustad Amir Khan, deoghoria attained his Sangeet Visharad and Sangeet Nipun i.e. a Master of Music degree from the Bhatkhande Sangeet Vidhyapeeth.

Prosenjit has always captivated his audience and evoked the true mood of Ragas by graceful flashes of Taans and Boltaans blended with Mend, which makes the journey into the traditional classical Ragas an out of theie ownself into a pleasure world as he creates the melody and unfolds the oceanic depth of the Ragas. He himself becomes one with the mood of the Ragas to make it a living and pulsating experience for himself and also for his listeners.

At a very young age, Shri Deoghoria has been able to attain eminence in India As a versatile performer for the reason that he blended with equal ease the various Gharana styles in his singing, such as Agra, Patiala, AlladiaKhan Gharana, but still keeping the pristine purity of the Amir Khani Indore Gharana.

The potential of Prosenjit has received due recognition in a number of competitions and conferences where he received awards of his meritorious performances. A first prize winner of the Maharishi Award in the All India Music competition of khyal singing organized by Maharishi Gandharva Veda Vishwas Vidyapeeth 1993.Shri Deoghoria was also awarded the National Scholarship from the department of culture, Government of India for intensive training in classical music in 1991. For his outstanding performances, the renowned Tabla Maestro Ustad Alla Rakha Khan and the erudite Santoor Player Pandit Shiv Kumar Sharma also honored Shri Deoghoria with the Prsestigious HMV Award.

An academician by temperament Prosenjit has also created his own more than 550 Khyals compositions in different Ragas and taals is in the process of the compiling them in the form of a book on Indian classical music. He also composed Bengali Modern Songs and Bhajans.