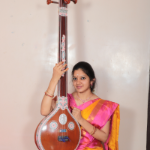 Festival.And also performed in All India Radio for Illaya Bharatham .I Am also a Veena learnera

and iam learning it from 13 years from Mrs.Mythili Haridas

I have won numerous prizes in both vocal and instrument . I have won the “ Special Outgoing

Student” for the Year 2016 to 2017 for my excellence in both cultural and academics.