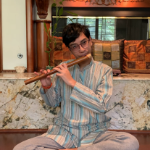 Nithin is a proficient musician and has been learning flute for the past 8 years. He is the disciple of Guru K R Subramanyam (a direct disciple of Flute Ramani Sir). Nithin has also learnt Carnatic vocal music from Smt. Padma Kutty in Irvine. Nithin has performed in several local events including Maarga, SIMA and is a two-time (consecutive year) winner at the Cleveland competition in flute as well as the Indian Raga regional competition. He is also an accomplished western flute and Piccolo player and has performed at the Carnegie Hall and has been invited to perform at the Royal Hall of London and Paris. He is also an accomplished Piano player and was recently selected to perform at the famed Wiener Saal, Mozarteum, Salzburg, Austria.