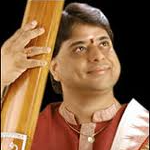 O.S. Arun, as he is more popularly called, is undoubtedly one of the most gifted Carnatic Musicians in the Country. He is known for his sonorous voice that he wields with much confidence and musical personality and which he employs in tandem with his superior stagemanship.

Arun inherits the mantle of singing from a family where music has been a way of life. Arun was given to Carnatic Music in the Parivar Parampara, and he began his music lessons under the careful ear of his father Vidwan O.V. Subramaniam. Arun later qualified Alankar Purna from Gandharva Mahavidyalaya. He also topped the Sangeetha Shiromani, a Diploma course in Carnatic music conducted by the Faculty of Music and Fine Arts at Delhi University.

Known for its vitality, Arun's Music has combined grace of sound grammar and warmth of feeling. He also has a wide repertoire of songs, which has earned him a keen following.

Arun has performed widely, both in India and abroad. His performances at various festivals include appearances at the India International Centre, the India Habitat Centre, the Vishnu Digambar Festival, the Rasika Ranjani Sabha, Calcutta, the Krishna Gana Sabha, Haridas Sammelan, Mylapore Fine Arts Club, and Kalarasana Chennai, the Badri Kedar Utsav arranged by the UP Cultural Department, ICCR's Parivar Parampara Series, Sangeet Nrityotsav arranged by the Sangeet Natak Akademi/ICCR, the Sanskriti Festival, London, World Adelaide Festival, Australia. The International Delima Festival, Mauritius, the 45thIndependence Day, Kabul, Afghanistan, the National Centre for Performing Arts, Bombay. He was featured at the Qutub Festival, Delhi. He also performed for the United Nations on the occasion of Human Rights Day. His appearance as Kovalan in an Indian Opera staged at the Singapore Art Festival won accolades both by the people and the press. Arun's trip to Canada every year has given him new directions for collaborative works with Jazz Musicians.

Arun's remarkable control over the music idiom and his astounding range of music in performances have often proved the remarkable ability of this artist to infuse traditional compositions with new vocal vigour and the impact has always been one of inordinate vocal power which was always married to grace.

Over the years, Arun has recorded numerous albums as CDs and DVDs which have become extremely popular among the people: